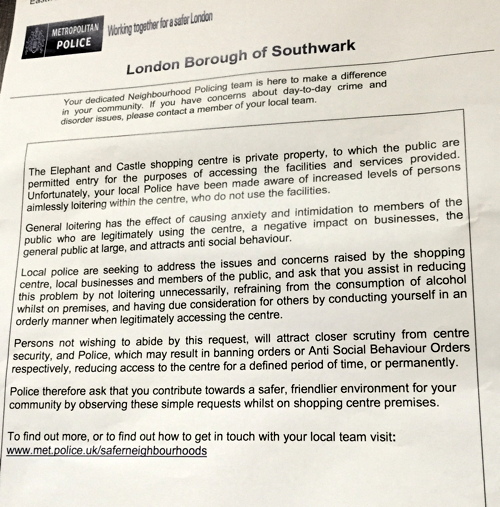 Densely worded notices intended to deter would-be loiterers have been produced in English and Spanish and posted in the windows of several shops at Elephant & Castle Shopping Centre.

"Unfortunately, your local police have been made aware of increased levels of persons aimlessly loitering within the centre, who do not use the facilities," says the notice produced by the East Walworth Safer Neighbourhoods Team.

"General loitering has the effect of causing anxiety and intimidation to members of the public who are legitimately using the centre, a negative impact on businesses, the general public at large, and attracts antisocial behaviour.

"Local police are seeking to address the issues and concerns raised by the shopping centre, local businesses and members of the public, and ask that you assist in reducing this problem by not loitering unnecessarily, refraining from the consumption of alcohol whilst on premises, and having due consideration for others by conducting yourself in an orderly manner when legitimately accessing the centre.

"Persons not wishing to abide by this request will attract closer scrutiny from centre security, and police, which may result in banning orders or Anti Social Behaviour Orders respectively, reducing access to the centre for a defined period of time, or permanently."

Although the notice threatens loiterers with an ASBO, these have in fact now been abolished and replaced by civil injunctions.

10 years ago the former owners of the shopping centre banned people wearing hoodies from entering the building, prompting a demonstration by George Galloway's Respect party.