Half a century after Elephant & Castle Shopping Centre opened, the latest in a long series of redevelopment plans has gone on public display. 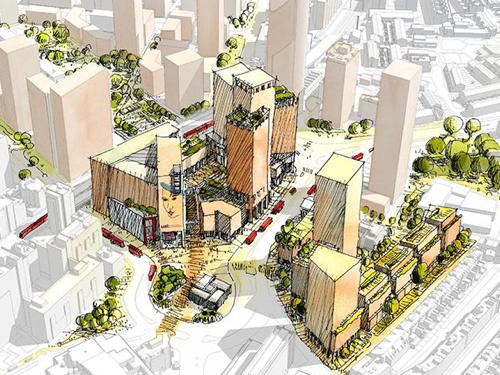 The new plans have been revealed 18 months after the shopping centre changed hands in an Ł80 million deal.

The latest scheme is led by Delancey who have appointed local architects Allies & Morrison to design the new mixed-use complex.

Earlier this month Delancey revealed that the London College of Communication would form part of the redevelopment, with a new college building proposed for the site of The Coronet in New Kent Road.

In turn, the existing LCC site will be redeveloped with hundreds of new homes.

Across the shopping centre and LCC sites, a total of 1,000 new homes is proposed – all to be let at market rates on tenancies of one, two or three years.

When taken together with Delancey's Elephant Road scheme and Realstar's tower at Newington Butts, Elephant & Castle could soon have around 1,650 new 'private rented sector' (PRS) homes.

Delancey's Jamie Ritblat said: "We want people to be at the heart of our proposals for the revitalisation and renewal of the town centre.

"In that spirit, local feedback is key to ensuring our vision corresponds with that of the local community and wider activities within the regeneration area.

"This public exhibition will show for the first time our emerging plans to deliver a fantastic new town centre at the heart of Elephant & Castle.

"Proposals include new world-class educational facilities, a significant increase in homes for rent and improved shopping and public realm for locals and visitors alike.

"We would like to encourage everyone to visit the exhibition and provide feedback to help inform the next stage of the design process."

The new buildings will be up to 36 storeys in height, with the tallest to the south of the existing shopping centre site.

The new London Underground Northern line entrance will face the new Elephant Square at the north-west corner of the site.

The redevelopment will include three levels of retail but this will not be in a covered mall. A key aim is to create new east-west links across the site, with new views of the Metropolitan Tabernacle being opened up from the railway station.

New access through the railway arches will provide a pedestrian connectionto the adjacent Elephant Park development by Lendlease.

A cinema – originally planned for Delancey's other site to the east of Elephant Road – is now likely to be part of the shopping centre redevelopment instead.

By the time the shopping centre closes in late 2016 or early 2017 the new Sainsbury's in Elephant Road – roughly the same size as the current Tesco Metro store – should be up and running, providing some continuity for local residents during the upheaval.

Nigel Carrington, vice-chancellor of University of Arts London, said: "We are delighted that a new centre for UAL's core university services and a new cutting edge campus for London College of Communication will be at the heart of one of London's most exciting regeneration projects.

"UAL is proud to have been at the heart of Elephant & Castle for more than half a century and this development will mean we are there for years to come.

"This investment will mean a great deal to our staff and students, many of whom live and contribute in many exciting ways to the vibrancy of Elephant & Castle."

The public exhibition of Delancey's proposals continues on Thursday, Friday and Saturday this week.

The exhibition display boards are also available at www.elephantandcastletowncentre.co.uk

A further exhibition will be held at the end of the year, with a planning application to be submitted in early 2016. If approved, work will begin in early 2017.

The scheme is likely to be completed in the early 2020s, with the new homes on the current LCC site forming the final phase of development.

What do you think of the latest plans?