A multidisciplinary team of students at Florida International University has created a virtual reality experience based on Bankside in the age of William Shakespeare. 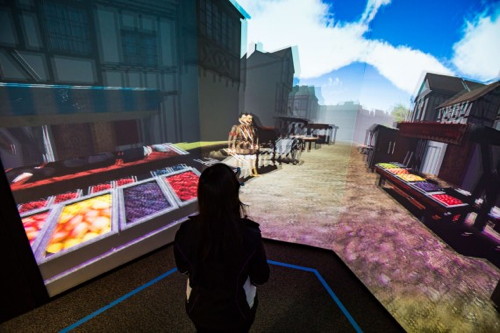 The I-CAVE, short for Integrated Computer Augmented Virtual Environment, is a new facility composed of five 9-by-5 foot, high-resolution screens arranged in a hexagonal pattern. Visitors are given goggles and a remote control to navigate a virtual world.

The first project at the I-ICAVE is Shakespeare's London circa 1598, featuring the Globe Theatre on Bankside.

"The goal of the project is to recreate the experience of what it must have been like to see a play in Shakespeare's era," said David Frisch, the project manager.

"It was loud. It could get rowdy and crazy, and people would throw tomatoes at performers during plays."

The students decided that their cast of characters – including a Spanish merchant, vagabond, prostitute and "snobbish English man" – would consist of 2D cut-outs taken from early modern works of art.