Save the RV1: locals march on City Hall to show support for bus

Bankside residents protesting against plans to axe the RV1 bus service have staged a protest along the route. 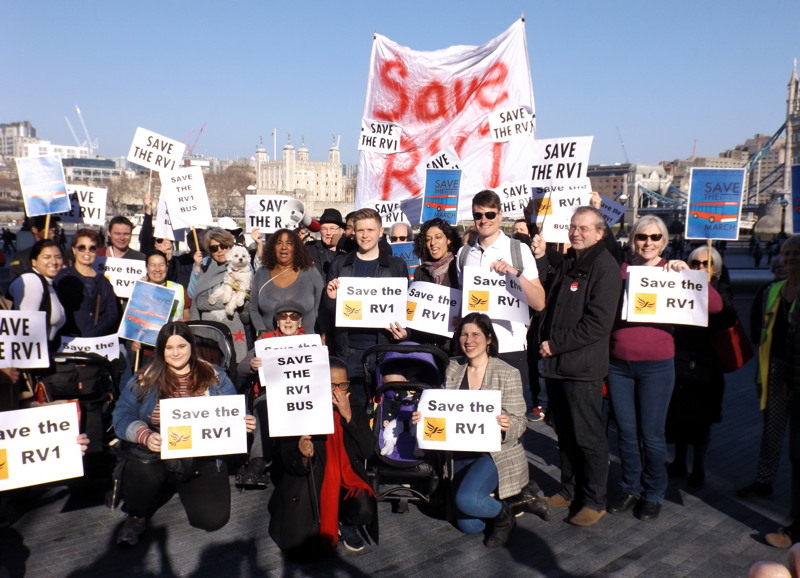 The RV1 bus route which links Covent Garden with Tower Gateway via the South Bank and Bankside could be withdrawn in a matter of weeks if Transport for London's plans to cut the number of buses in central London are signed off by the Mayor of London and his top officials.

Launched in 2002 as the Riverside Bus, the RV1 saw its frequency halved a year ago with a 20-minute gap between buses.

Cries of 'Save the RV1' were met with waves from passers-by and toots from several RV1 bus drivers.

The protesters made a slight diversion from the current RV1 route to pause outside Tate Modern which is one of the riverside attractions linked by the service.

Many walkers stressed that the RV1 brings tourists to Bankside where money is spent.

The protest was organised by the residents group Living Bankside and supported by the local Liberal Democrat ward councillors, Adele Morris, David Noakes and Victor Chamberlain, who were present.

"The areas of London which the RV1 bus services are set to see an exponential growth in residential population, number of employees and visitors," said Amir Eden, executive chair of Living Bankside.

"We believe Transport for London's proposal is short-sighted and that the removal of the RV1 bus service will cause a a greater void in the public transport network in the future."

At City Hall, where the crowd called on Mayor of London Sadiq Khan to reprieve the route, the residents were addressed by Southwark's Liberal Democrat leader Anood Al-Samerai and Labour's cabinet member for transport Richard Livingstone.

"It's really important that we don't give up and that we keep campaigning," said Cllr Al-Samerai.

She added: "We can absolutely save this bus. No final decisions have been made, but we will only stop it happening if we put lots of pressure on our councillors, our MPs, our GLA representatives and the Mayor."

Cllr Livingstone said: "All of us across Southwark Council think the RV1 is a vital service for our community. We need to save it."

He suggested that TfL should re-examine usage patterns for the RV1 since the reopening of Tooley Street and called for TfL to show "smarter thinking and better marketing" to promote greater use of the service.

Public consultation on plans to alter and reduce bus services across a swathe of central London ended in November last year but TfL has not yet formally announced its next steps.

Earlier this month TfL indicated that some of its proposed changes will be tweaked as a result of the consultation process.

"We are finalising analysis of the consultation results, including modification of the number of the proposed schemes, including considering the responses," said TfL.

"We expect to implement the first changes from the consultation in spring 2019 and following publication of our consultation response."