Southwark Scouts organised a Sunrise Ceremony at Jubilee Gardens to mark the centenary of Scouting. 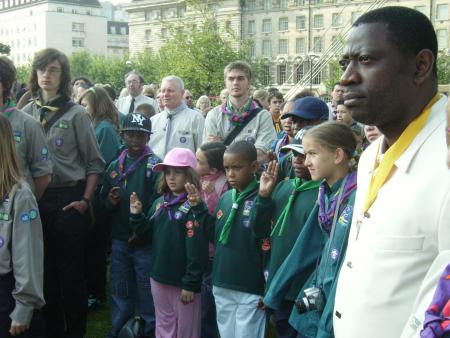 Scouting founder Robert Baden-Powell blew his kudu horn on Brownsea Island in Poole Harbour at 8am on 1 August 1907 to open the world's first Scout camp. The London riverside gathering on Wednesday was at 8am to celebrate the actual centenary.

The ceremony was held simultaneously on Bownsea Island and at the Centenary World Scout Jamboree at Hylands Park in Essex. About 28 million Scouts around the world were expected to be joining together in a worldwide display of peace, tolerance and harmony at 8am local time.

In Jubilee Gardens, as Big Ben struck 8am, local Scouts led Beavers, Cubs, Scouts and adults in renewing their promises on Scouting's birthday.

Afterwards there were free rides for members of the Scout Association on the London Eye.