Eight members of a new Explorer Scout Unit based in Bermondsey climbed the tower of Southwark Cathedral last week to make their Scout promises. 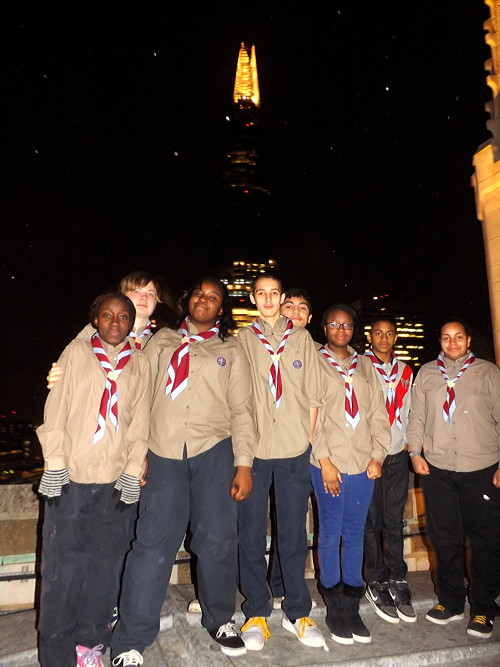 The new Shard Explorer Scout Unit, based at Bermondsey Central Hall in Bermondsey Street, will enable boys and girls who have grown up as members of Scout troops in North Southwark to continue to take part in adventurous activities and community projects once they turn 14.

17-year-old Josh Langdown has coordinated the new unit. He said: "Explorers is about developing your Scouting, getting to know the world and getting your face known in the world."

All members of the worldwide Scout movement make a promise to do their best to do their duty to God, their country, to help other people and to keep the Scout law.

The eight teenagers, aged 14 to 17, made their promises in the ringing room in the cathedral tower before heading up to the very top of the tower in the snow and wind where they posed for pictures in front of the Shard.

"Explorer Scouting hasn't been around for very long in Southwark in any wide form, and it's growing massively," said Alex Ward, District Explorer Scout Commissioner for the borough.

"Explorer Scouting is the next step; it's bigger and better. It's also that stage of a young person's life where rather than being told what to do by somebody, they are able to flex their independence a bit more thoroughly.

"They are there to get opportunities to build their confidence, learn life skills, to get out there for adventure and be a young adult with some clout behind them."

Canon Gilly Myers, precentor of Southwark Cathedral, congratulated the Shard Explorer Scouts on their "innovative, energetic and imaginative" name, and said she hoped that, like the skyscraper, they would have strong foundations and reach for the sky.

They were joined for the occasion by Revd Dr Janet Corlett, Methodist minister at Bermondsey Central Hall, who led a short reflection.