Barack Obama, president-elect of the United States of America, is to be invited to visit Southwark next time he comes to the United Kingdom. 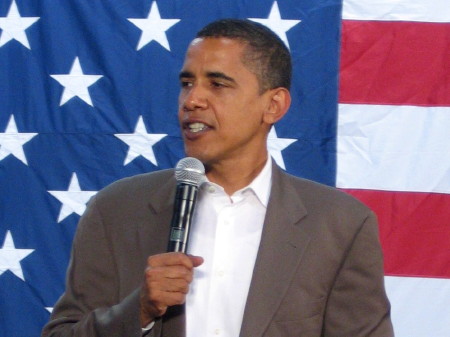 Photo by "transplanted mountaineer". Licensed with a Creative Commons licence.

The president-elect is a graduate of Harvard University in Cambridge Massachusetts.

Harvard is named after its principal benefactor John Harvard who was born and brought up in Southwark. His family ran the Queen's Head inn in Borough High Street.

A year ago the borough celebrated the 400th anniversary of John Harvard's baptism in the church now known as Southwark Cathedral.

A blue plaque in honour of John Harvard is to be affixed to the refurbished John Harvard Library when it reopens next year.

An urgent question to the leader of Southwark Council was tabled at Wednesday night's council assembly meeting by Labour councillor Ian Wingfield.

Cllr Wingfield asked Cllr Nick Stanton whether he would write to Senator Obama on behalf of the council to offer congratulations on his election victory in view of the borough's connections to Harvard and the fact that the Mayflower sailed from Rotherhithe in 1620.

The Camberwell councillor, who has spent two weeks in the United States campaigning for the Obama-Biden ticket, also asked the leader to invite the new president to come to the borough during his next visit the UK.

The council leader confirmed that he would be writing to Senator Obama. Cllr Stanton described the election as "a victory for small D democrats and democracy".

He also reminded councillors of the 1968 visit to Southwark of US vice-president Hubert Humphrey.

Which places in Southwark would you take Barack Obama to visit?