10,000 teenagers see Shakespeare for free at the Globe

10,000 young people came to Shakespeare's Globe last week to see a professional production of 'Much Ado About Nothing' for free. 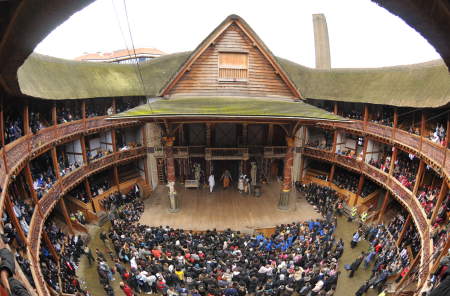 The performances were offered as part of the 'Playing Shakespeare with Deutsche Bank' project.

The production has been created specifically to support 14 year olds preparing for exams. In the weeks leading up to the performances more than 1,200 London students have worked with Globe Education practitioners in workshops to support their study of the play in preparation for seeing the performance.

Our Theatre: Southwark children take to the stage

This week 450 children aged 5 to 16 will be performing in an ensemble production of Hamlet for 'Our Theatre', a schools' project involving 15 Southwark nursery, primary, secondary schools and schools for students with Special Educational Needs.

Each school will take a section of the play and interpret it through a series of workshops over six weeks with a Globe Education practitioner. The students will choose which lines are included and how they are performed. All the schools come together to form the ensemble production that will take place at Shakespeare's Globe on Thursday, attended by an audience of people who work, live or learn in Southwark.

"Through 'Our Theatre' students are given access to the Globe Theatre and the processes of creating a production for the Globe stage," says Patrick Spottiswoode, director of Globe Education. "The project deepens and enriches Shakespeare's Globe's positive relationship with the local community and the production is a delight to watch."