Patrick Spottiswoode - one of the first people hired by Sam Wanamaker when he started his campaign to reconstruct Shakespeare's Globe - has been awarded an honorary doctorate by Warwick University. 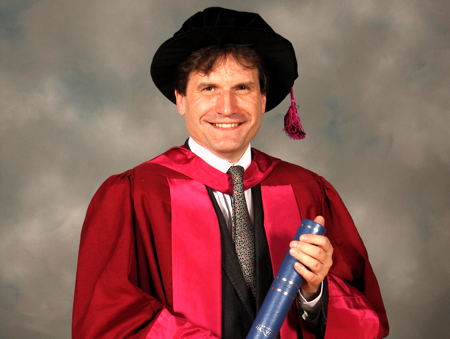 The founding director of Globe Education received the honour last month, 30 years after his original graduation and in recognition of his outstanding contribution to the teaching of Shakespeare worldwide.

Patrick Spottiswoode read English and theatre studies at Warwick from 1978 to 1981, and in 1982 received a masters degree in English and European renaissance drama from the university.

27 years ago he took a year off from working for his PhD to join Shakespeare's Globe – and he has remained at Bankside ever since.

"It's a long way from the day in 1984 when Patrick Spottiswoode answered Sam Wanamaker's advertisement for someone to run a museum, arts centre, and café – the Bear Gardens on Bankside SE1," said Professor Anthony Howard in his oration.

"Patrick soon discovered that the museum was a leaking warehouse, he'd have to start the arts centre with his own books, and the café consisted of a kettle.

"Few recall now that it seemed in the 1980s that rebuilding the Globe was an impossible dream, even an unwelcome one. It was an archaeological irrelevance, opponents said, or a scheme devised by property developers, or Disneyland-on-Thames.

"More than any other single factor, it was the educational work conceived and directed by Patrick Spottiswoode that dispelled this cynicism."

Nowadays Globe Education provides lectures, workshops, courses, productions and tailored projects for more than 100,000 people every year, and for many more through outreach projects.

Its programme includes work with primary schools in Southwark, postgraduate programmes run with King's College London and Cambridge University, and an annual professional production for London school children which has given free tickets to more than 50,000 young people since 2007.