Shakespeare's Globe has announced that its new education and rehearsal space on Park Street - due to open later this year - will be known as The Sackler Studios. 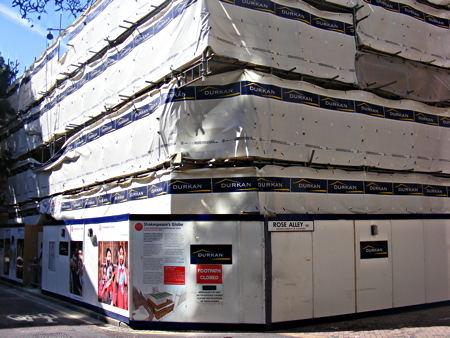 Under wraps: the Sackler Studios will open later this year

Globe Education had previous said that the centre would open this summer, but the completion date is now described as 'late 2010'.

The Sackler Studios, made possible by charitable donations and a generous primary grant from The Dr Mortimer and Theresa Sackler Foundation, will provide Globe Education with four workshop studios and a rehearsal space for students and actors.

The new facilities are on the corner of Bear Gardens and Park Street on the site of Sam Wanamaker's first office in Bankside and where he developed his ideas for Shakespeare's Globe.

Sam Wanamaker's vision was driven by education and he recruited Patrick Spottiswoode, director of Globe Education, in 1984 long before the theatre opened. Patrick has built Globe Education into one of the largest Arts Education departments in the country.

He is passionate about working with local communities around Southwark, as well as students of all ages throughout the UK and overseas. Over 100,000 young people a year attend bespoke workshops and projects on site at the Globe.

"We are delighted to support the work at Globe Education," says Mrs Theresa Sackler. "The Sackler charities are committed to supporting culture. Shakespeare, and his work, is the best of British culture, renowned throughout the world.

"Like Sam Wanamaker, we feel that broadening awareness and appreciation of this unique art is achieved through active and creative education programmes.

"We hope the Sackler Studios will provide the environment and space for Globe Education to expand their imaginative programmes to inspire as wide an audience as possible."

Dr Mortimer Sackler, who died in March aged 93, was one of three Anglophile American brothers who made their fortune in pharmaceuticals in the 1950s and 1960s.

"Little did I know when Sam recruited me at Park Street in 1984 that 27 years later it would become a valuable and much needed additional space to accommodate the many varied activities at Shakespeare's Globe," says Patrick Spottiswoode.

"Sam would be delighted to see the vibrancy of the projects designed by Globe Education to engage and enthuse students about Shakespeare from pre-school three year-olds to silver-haired students of the third age, the training programmes for undergraduates and conservatory students, and the range of public events.

"The Sackler Foundation's generous grant keeps Sam's dream a living reality. It allows even greater engagement with the local community and offers more opportunity for young and old around the globe to capture Sam's dream."

The new Sackler Studios have been designed by Globe architect Jon Greenfield with input and internal designs by award-winning architects Eldridge Smerin.

Following consultation with young students from Southwark, Eldridge Smerin responded to the wish that the centre reflect the Globe Theatre by bringing in the use of oak and the shape of the theatre into their designs.

There will be a cafe for public use on the ground floor of the Sackler Studios.