A huge advertising billboard has been unveiled at London Bridge Station to promote the NSPCC and brighten up hoardings on the concourse. 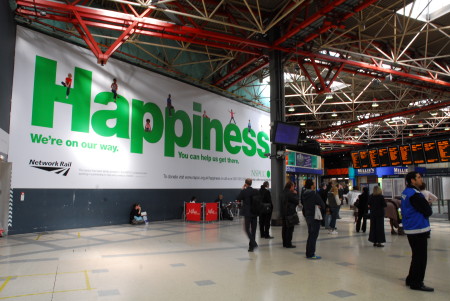 Network Rail has unveiled the largest advertising billboard ever installed at its managed stations to support the work of a charity chosen by railway staff.

The advertisement for the company's charity of choice, NSPCC, is six times bigger than a regular 48-sheet billboard. It is as wide as the length of two London buses, a train carriage or a cricket wicket.

The poster will be in place on the main concourse at London Bridge Station for at least a month.

The hoardings have been erected on the concourse as part of the demolition of Southwark Towers and other preparatory work for the Shard of Glass skyscraper.

The record-breaking advertisement spells out the word 'happiness' with pictures of life-size children sitting on each letter, which are up to 2 metres tall.

"We are always looking at new ways in which we can support our charity of choice," says
Network Rail's Jerry Swift.

"We identified that with London Bridge under redevelopment, that there were opportunities to use a great advertising space that wasn't being used commercially.

"And rather than just do a normal ad, we thought we'd go one better and create the biggest advertising hoarding we've ever done at our stations.

"That way we can shout louder than we ever have about our support for NSPCC, which does fantastic work to help children and their families all over the UK.

"We're really proud to be able to support NSPCC in getting its message out to the people who travel through London Bridge station each day."