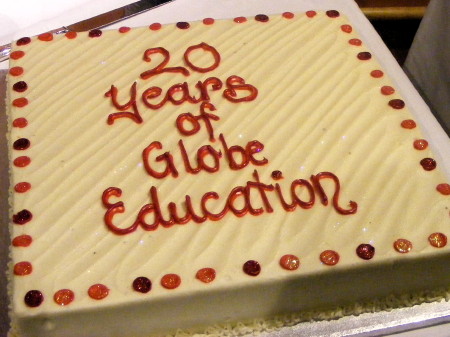 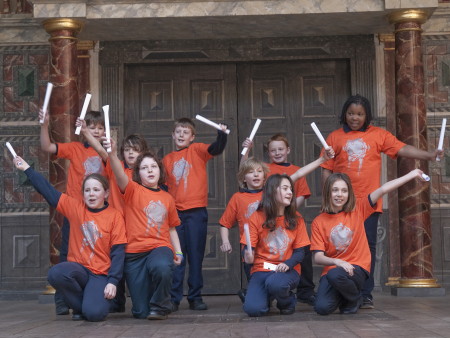 Pupils from Dulwich Hamlet Junior School on the Globe Stage

Children from Friars Primary School and Charles Dickens Primary School in SE1 were among pupils from fourteen Southwark schools joining together to stage Shakespeare's King Lear.

The 'Our Theatre' performance is Globe Education's annual flagship community project and this year 472 pupils had the opportunity to train and rehearse for a performance before an audience at Shakespeare's Globe.

Afterwards the Mayor of Southwark Cllr Eliza Mann joined Patrick Spottiswoode on the stage for the symbolic handing over of the flag to the Globe's artistic director Dominic Dromgoole representing the next company to play at the Globe. The new season opens with Romeo & Juliet on St George's Day 23 April which is also Shakespeare's birthday.

Speaking at a reception afterwards, David Adair, head of community affairs at sponsors PricewaterhouseCoopers, said: "Isn't it great to see vibrant intelligent and confident young people of Southark performing like that?

"It's all about young people having permission to take ownership of that stage which they do so well. It is shared vision which we have with Globe Education."

Patrick Spottiswoode described the sponsorship as a very special partnership working with the community. "It is really a model for other communities to follow," he added.

Globe Education's twentieth anniversary was marked by the cutting of a giant cake but only after David Adair had reminded everyone that Patrick had been with the Globe project for 25 years. "Globe Education would not be where it is today without him."

• This week Boris Johnson confirmed details of the Mayor of London's support for St George's Day celebrations which will include a Sonnet Sunday fun day at the Globe. Globe musicians will also perform a contemporary range of percussive music on period instruments at the Mayor's St George's Day event in Trafalgar Square on Saturday 25 April.