The future of the All Hallows church site in Copperfield Street continues to provoke strong opinions as Southwark Cathedral presents its latest proposals for a new housing development. 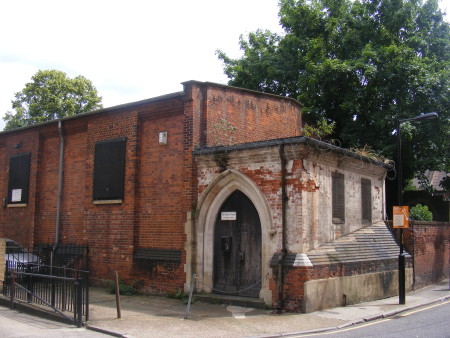 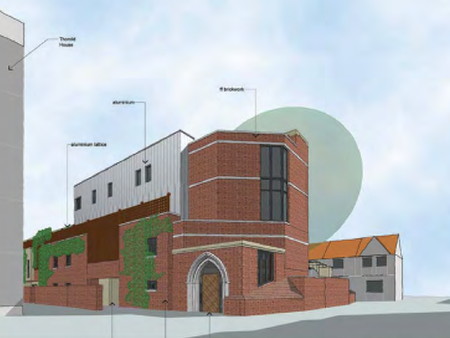 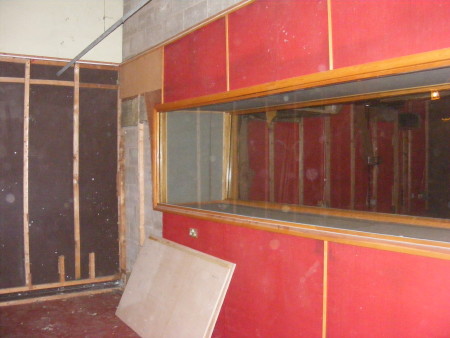 Formerly used as a suite of recording studios, the All Hallows building is now in a run-down state

Southwark Cathedral, which owns the All Hallows site, has been seeking to redevelop the land for more than four years. Planning applications were rejected in 2005 and 2007 following fierce opposition by nearby residents worried about loss of light and an increased sense of enclosure.

Some residents also complain that they feel that the cathedral has failed to adequately consult neighbours on its proposals. There is also concern that the development will spoil the peaceful atmosphere of All Hallows Garden on Copperfield Street which has become a much-loved local green space.

Campaigners claim that the new building will "box in" the Winchester Estate to the north, creating a "tomb-like effect" with reduced natural light and privacy as well as extra noise.

Since the rejection of the earlier planning applications the cathedral has engaged a new architect, Union Street-based Roger Molyneux, who has devised a more modest scheme for the site.

The latest proposals were first unveiled at a Bankside Residents' Forum meeting in April and this week the cathedral hosted two public meetings in All Hallows Hall to give local residents an opportunity to learn more about the proposals and air their views.

The meetings – which were at times ill-tempered and disrupted by heckling – were co-chaired by Archdeacon of Southwark Ven Michael Ipgrave with Cllr David Noakes (Monday) and Simon Hughes MP (Tuesday).

The original All Hallows church designed by George Gilbert Scott dates from 1879 but the building was largely destroyed during World War II. A smaller replacement church was built in 1957 which in later years was subdivided for use as recording studios. The building has been unused for a number of years.

The design by Roger Molyneux involves the demolition of the post-war church whilst surviving elements of the Victorian building would be retained.

The current scheme includes nine new homes (1, 2 and 3 bedrooms) in a part 4-storey building on the church site and a new home for the cathedral's canon pastor (parish priest) within the existing All Hallows Hall building. The chancel and crypt of the Gilbert Scott church would be turned into 50-seat worship and community space.

The Dean of Southwark, the Very Revd Colin Slee, told the meeting that the cathedral was committed to using the All Hallows site – which remains consecrated ground – as "a place for prayer and ministry in the neighbourhood".

The Dean explained that the redevelopment of the site is driven by the cathedral chapter's wish to address local pastoral concerns, financial need and legal obligations. He said that a development at All Hallows would provide both an income stream to finance pastoral work and a new space for some of that work to be carried out.

He outlined several areas of pastoral work – including support for teenage mothers, work with older people and a youth club – that the cathedral had not been able to tackle due to a lack of appropriate space and funding.

Simon Hughes MP told the meeting that he had had a "falling-out" with the Dean over the future of All Hallows which had led to his resignation from the cathedral council.

"The garden was created by locals and has been maintained by them, voluntarily and with little help from the church, since the Blitz," says Una Devine of the Save All Hallows Campaign Group. "That is why we are fighting so hard to protect this precious resource in SE1, not only for ourselves but for the thousands of workers in the area who enjoy the peace the garden provides."

The Dean acknowledged the contribution local residents have made to the maintenance of the space over the past 30 years but he insisted that the chapter's legal responsibility for the land meant that the cathedral would need to exert greater control over the garden in future.

He added that the cathedral churchyard is maintained by horticulture students from Walworth Garden Farm and the cathedral intends that that arrangement should be extended to All Hallows in future.

The Dean was pressed by local residents for details of the financial arrangements for the development. He explained that it would be at least 10 to 15 years before the cathedral saw a financial return on the All Hallows site. Responding to residents who expressed doubt about the scheme's viability, he pointed out that a couple of decades was insignificant in the context of the cathedral's 1,400-year history.

This argument doesn't find favour with the scheme's detractors: "Unlike much of the business community in the current climate, the church could not be that financially challenged if it can afford to sustain a development that will not make a return for the best part of two decades," says Una Devine. "There are few businesses that have the luxury of operating like this."

One resident voiced concern that the cathedral might seek to dispose of the land once planning permission has been granted. "There is absolutely no intention to sell," said the Dean, who pointed to the inclusion of a worship space in the development as evidence of the cathedral's long-term commitment to All Hallows.

The Dean also gave a commitment to continued public access to the garden.

A planning application could be submitted in the next few months. If the scheme goes ahead it would take about 18 months to build. The garden would remain open during the construction period.

"There were no objections to the church being developed," says Una Devine. "In fact, we have declared for years that it is in the community's interest to have the church developed to stop the shameful state of repair that Southwark Cathedral has allowed it to fall into."

The cathedral has now agreed to a further meeting with representatives of local residents to discuss the details of their concerns and to hear their suggestions for alternative uses of the site.

• Plans for the development can be viewed on the cathedral website