Oyster pay as you go: what does it mean for Southwark and Waterloo East passengers?

Oyster pay as you go is now available on National Rail services throughout Greater London - and there's good news for Waterloo East passengers wanting to take a short-cut via Southwark tube station. 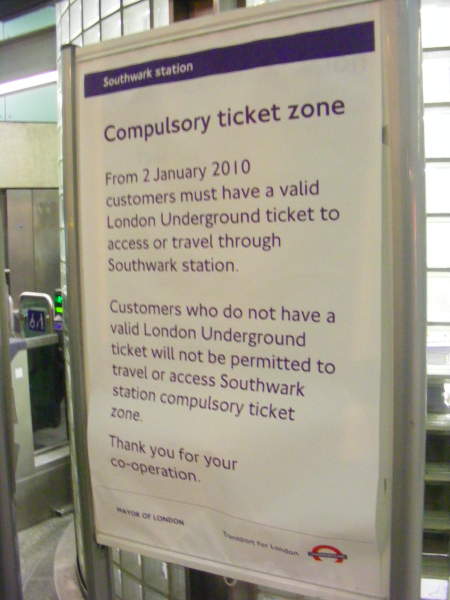 However, conflicting information about the need for platform tickets or the ability of National Rail passengers to use the Southwark Station underground passageway as a shortcut made this a relatively unattractive option.

In December a poster appeared at Southwark station warning that from 2 January "customers who do not have a valid London Underground ticket will not be permitted to travel or access Southwark station compulsory ticket zone".

But that unfriendly notice doesn't tell the full story. We asked Transport for London for further details of how Oyster pay as you go (PAYG) passengers would be charged when travelling on National Rail services from Waterloo East.

"Members of the public who just wish to use the passageway as a short-cut to Southwark and do not have a valid ticket for the Tube will be required to purchase a Ł1 platform ticket available from ticket machines," said a TfL spokesperson.

"Rail passengers with a valid Travelcard, National Rail season ticket or using Oyster pay as you go for their rail journey will be unaffected and will not be charged to access the passageway."

This means that passengers making a National Rail journey wholly within Greater London on Oyster pay as you go can now pass through Southwark's two ticket barriers to reach the Waterloo East platforms without penalty.

The only passengers who should need to buy a platform ticket at Southwark are holders of paper National Rail tickets to/from Southeastern stations.

Oyster PAYG users may find the ability to use their card on mainline services particularly useful during the many weekend closures of the Jubilee line when no replacement bus service is provided west of London Bridge.

The new ease of access for many Waterloo East rail passengers afforded by the advent of Oyster pay as you go on National Rail may help to strengthen the case against a new direct access from the street to the mainline station.