The first traffic signals in England to display a countdown for pedestrians were unveiled in Blackfriars Road on Monday morning. 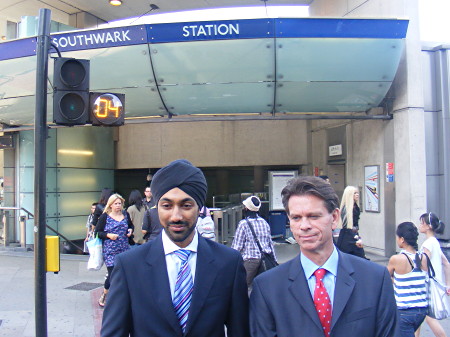 As we reported earlier in the month, Transport for London is trialling the countdown timers at eight junctions in the capital including crossings in Blackfriars Road, Tooley Street and Old Kent Road.

The first new-look signals were unveiled at the junction of Blackfriars Road, The Cut and Union Street by the Mayor of London's transport advisor Kulveer Ranger and David Brown, Transport for London's managing director for surface transport.

The timers will count down the time between the green man symbol going out and the red man appearing. This will make it clear to pedestrians how much time they have left to cross the road safely.

The timers also mean that the green man phase has been reduced in time with the aim of improving the flow of road traffic.

"What you have at the moment is a system whereby there is a green man invitation to cross for pedestrians, followed by what we call a blackout period which allows people enough time to cross the road, but people don't really understand whether they can cross the road or not," TfL's David Brown told the London SE1 website.

"What we're doing is replacing that blackout period with a numerical countdown display which gives certainty and allows people to know exactly how much time they've got to cross the road."

With Transport for London facing substantial budget cuts, Brown is unapologetic about spending money on this sort of experimental scheme: "One in five fatalities and serious injuries to pedestrians take place at these traffic light junctions. If we only reduce one of those with the investment we've made already, there's a payback immediately.

"I think it is beholden on us to find ways in which pedestrian safety is improved."

The 18-month trial is part of a commitment by the Mayor of London, Boris Johnson, to "smooth the flow of traffic" in the capital.

Not everyone is convinced. Jo deBank from London TravelWatch said: "Pedestrian Countdown can benefit pedestrians so they know how much time there is to cross the road, as we know that some people are unsure about when to cross.

"However, we do not want to see a indiscriminate reduction in crossing times, and where crossing times are reduced we want to see bus users, cyclists and pedestrians getting the benefit, not general traffic, as we are concerned that it could lead to more traffic in London."

• For more information about the trial, visit www.tfl.gov.uk/pedestriancountdown