The campaign to raise funds for a statue of Albert McKenzie, the Bermondsey boy who was the first London sailor to be awarded the Victoria Cross, has announced its appeal target of £100,000. 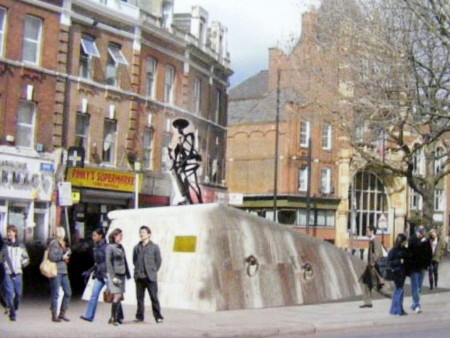 Forge Architects has design a plinth - based on the Zebrugge sea wall - for the statue designed by Kevin Boys at the junction of Tower Bridge Road, Bermondsey Street and Decima Street

The launch date was chosen because 10 August is the anniversary of the beginning of World War I in 1914.

Albert McKenzie was one of the service personnel who took part in the famous Zebrugge raid when allied troops attacked the German fleet in their Belgian harbour to block their exit at a crucial part of World War I.

The raid took place on St George's Day 1918 and more than 200 allied soldiers were killed.

Albert McKenzie was awarded the VC by the choice of his comrades and received his medal from the King in July 1918.

He died during the influenza epidemic due to a weakened immune system two weeks before the end of the war.

Albert McKenzie was born and brought up in Decima Street in Bermondsey, attended Decima Street School and then was a club member of the Oxford and Bermondsey Club, based in Webb Street.

It is the Oxford and Bermondsey Club which has taken the initiative to lead the campaign for the statue with the support of Simon Hughes MP.

The target figure of Ł100,000 has been announced on the same day as the campaign website – www.albertmckenzievc.com – has been launched.

Initial fundraising has already taken place. Kevin Boys, a sculptor based in Bermondsey has been commissioned to create the statue. Architects have been employed and the pre-application has been made to Southwark Council.

It is intended that the statue will be erected at the junction of Tower Bridge Road, Decima Street and Bermondsey Street, just yards away from Albert's home and the club which is so proud of their valiant military hero.

"Today is a big step forward for our appeal and for our plans to turn this fantastic idea into reality, says Paul Keefe, chair of the appeal committee.

"With the site identified and the appeal target now set we can seriously get on with the business of finalising the design, putting in the planning application and raising the money.

"Anybody wanting to donate can do so via the website or by sending a cheque to the Stansfeld Club, Webb Street SE1 4RP (cheques to be made payable to the Albert McKenzie Memorial Fund)."

Later this month collecting tins will be placed in all the Bermondsey pubs.

At the beginning of September an approach will be made to all local businesses. And early in the new school year all local primary and secondary schools will be asked if they can help in fundraising.

The appeal committee want enough money in the bank to submit the planning application by Armistice Day this year (11 November), with the aim of unveiling the statue during 2011.

"The sooner the money is raised the sooner there can be this important new memorial to one of Bermondsey's greatest heroes visible for all to see in a prime site in our borough."

Simon Hughes, MP for Bermondsey and Old Southwark, who is the publicity officer of the appeal committee, said: "The Oxford and Bermondsey Club have launched this great idea for public recognition of one of the bravest citizens of Bermondsey, which deserves huge community support.

"From today we have the design of the statue, we know how much money we need and we have a great and usable website to spread the word far and wide. I hope there will be big public response from individuals and companies and organisations which have any connection with Bermondsey or the services or the people involved.

"Albert McKenzie has been far too little known for too long. We are determined not just for a few people to be proud of this part of our history but for as many people as possible to celebrate his bravery and his life."

• The first fundraising social event of the campaign will be held at the Oxford and Bermondsey Club on 25 September from 7.30pm, with tickets priced at Ł10.