The memorial to Bermondsey-born Albert McKenzie - who won his VC on St George's Day 1918 - has been cast at a local forge. 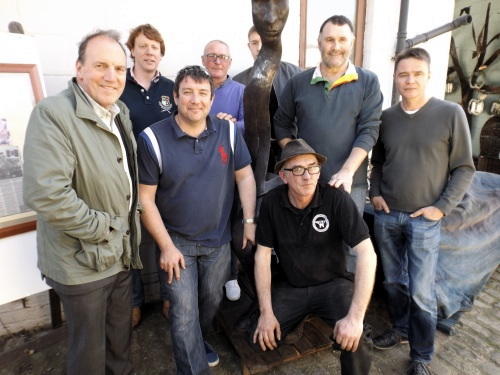 The able seaman saw off several enemy troops in the harbour at Zeebrugge despite sustaining severe injuries himself.

Although he survived the action he died of influenza six months later and just days after his investiture by George V at Buckingham Palace.

The casting, by Kevin Boys at his forge in Surrey Docks Farm, took place earlier this month in the presence of the appeal committee and supporters.

Simon Hughes – who has long championed the project – took time off from election campaigning to see the casting.

The memorial is to be installed at the street market site at the junction of Tower Bridge Road, Bermondsey Street and Decima Street.

The memorial has been designed by Kevin Boys working with local architect Tim Wood.

First World War hero Albert McKenzie lived in Shorncliffe Road. A message from the King and Queen Mary was read during his funeral at St Mark's Old Kent Road. He is buried in Camberwell Old Cemetery.

It is five years since the Albert McKenzie memorial appeal was launched. Paul Keele, speaking for the committee, said that with a few months to go the fundraising target had nearly been met.

Unveiling is provisionally set for October when Transport for London's road works are due to be completed.