RV1 bus route to be converted to hydrogen power

EU funding means that a further three hydrogen buses will be built for the RV1 bus route, joining the five zero-emission vehicles already on order. 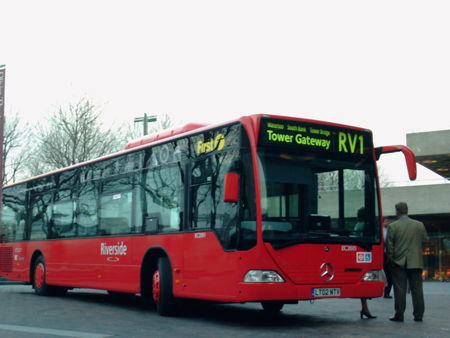 Transport for London has secured Ł5.67 million of funding as part of the European Union's Cleaner Hydrogen in Cities project to expand its current hydrogen bus project.

The funding allows for three additional zero-emission hydrogen hybrid fuel cell buses and the opportunity to extend the whole demonstration project from three to four years.

The additional buses will join the five hydrogen buses which are due to come into service on route RV1 later this year.

All eight buses will be in service by the end of 2011, at which point the entire route, which runs from Covent Garden to Tower Hill via the South Bank and Bankside, will be operated by zero emission hydrogen buses.

"This is knockout news for the Mayor's plans to cleanse the air we breathe every day," says Kit Malthouse, chair of the London Hydrogen Partnership and Deputy Mayor for Policing.

"Hydrogen vehicles emit only water from their exhaust pipe, unlike the fumes and pollution petrol and diesel engines spew forth.

"Having a bus route running entirely on hydrogen gives us a fantastic flagship fleet to demonstrate the massive benefits of this exciting fuel."

The first of the new hydrogen buses destined for the RV1 arrived in the UK earlier this year.

The vehicles have been built by Wrightbus in Northern Ireland and transported via ship to San Diego in California where the engines are installed. The buses are then shipped back to the UK for completion and testing.

Between 2004 and 2007 three hydrogen fuel cell buses were trialled on the RV1 route.

"We are delighted that this additional funding will allow us to have a bus route fully operating with hydrogen hybrid fuel cell buses, and this marks an exciting new chapter for London Buses as we embrace new technologies to further build on the excellent work we are doing to improve air quality for Londoners," says Mike Weston, operations director of London Buses.

The fleet of Mercedes Citaro buses used on the RV1 route from its launch in 2002 was withdrawn during the summer.

Smaller single-deck buses are currently being used on the route as an interim measure until the new hydrogen buses arrive.