Southwark Cathedral is one of 16 locations across SE1 hosting large representations of the Olympic and Paralympic mascots. 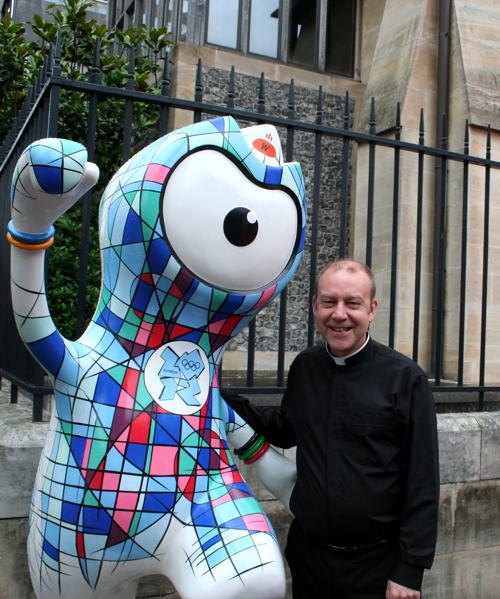 The Dean of Southwark, Very Revd Andrew Nunn, with the Southwark Wenlock figure

The Olympic mascot Wenlock and London 2012 Paralympic mascot Mandeville were devised in Bankside offices of Iris Worldwide. At one stage the company displayed a mock blue plaque in the windows of its Park Street offices recording the site as the birthplace of the two mascots.

The two-metre-tall figures that have appeared on London's streets this week were created from the last drops of steel left over from the construction of the final support girder of the Olympic Stadium.

Wenlock's name is derived from the Shropshire village of Much Wenlock which hosted Wenlock Games that inspired Baron Pierre de Coubertin to create the modern Olympics.

Mandeville's name comes from the Stoke Mandeville Games, widely recognised as a forerunner of the Paralympic movement.

"Created right here in Southwark, they are designed to be personalised and played with. They are also designed to be symbols of the creativity and innovation in British people and our cultural melting pot."

The steel figures have been arranged in six discovery trails around the city with the aim of encouraging Londoners and tourists to explore the capital on foot.

Each figure has been customised to reflect its location and the decoration of the Southwark Wenlock has been influenced by the cathedral's new Diamond Jubilee stained glass window.

"The positioning of this mascot is a perfect way of linking Southwark Cathedral to the blue and green discovery walks," said the Dean of Southwark, Very Revd Andrew Nunn.

"We are excited by the Olympics and the opportunity to welcome people from across the globe to this historic area of Southwark.

"I would like to invite anyone to turn up and to have their picture taken with our Wenlock, day or night."

Mayor of London Boris Johnson said: "Wenlock and Mandeville are instantly recognisable characters and life-sized embodiments of the excitement of London 2012.

"I can't think of a more suitable pair of tour guides to help Londoners, families and tourists alike get to know the capital a bit better and add to the magic of the games during this summer like no other."

After the games the sculptures will be auctioned to raise money for charity.

• Southwark Wenlock will be outside the cathedral until 15 August