The achievements of a Blackfriars Road resident were recognised at the fifth annual Peabody Volunteer Awards held at City Hall last month. 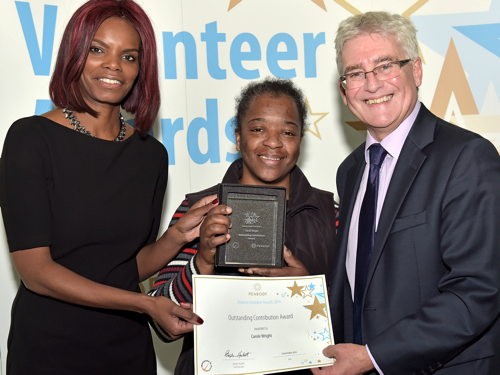 More than 120 volunteers were joined by staff from the Peabody Group and the Big Lottery Fund and the London Community Foundation at the event which recognised volunteers and volunteer groups who have made a significant contribution to communities, often by overcoming personal challenges.

Six awards were presented in total with Southwark resident Carole Wright receiving an award for 'outstanding contribution' for the all the support she has given to residents on the Blackfriars Estate including consultation events, a gardening project, day trips and the celebration of Peabody's 150th anniversary.

Peabody's chief executive Stephen Howlett said: "Carole is a volunteer who passionately cares about her community. She has achieved so much and helped so many by offering projects and experiences that have benefited individuals, not only on her estate but others surrounding it."

Carole said: "You don't expect recognition but it is nice to receive. I can't thank Peabody enough for the support they have offered over the years which has included everything from training to funding and everything in between."

Peabody works with 22 resident-led management committees who volunteer 24,000 hours of their time every year. This is on top of 410 individuals who volunteer their time to benefit their communities across London.