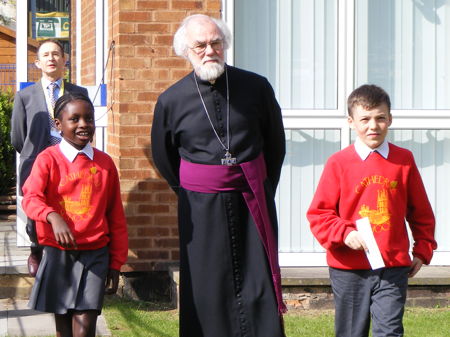 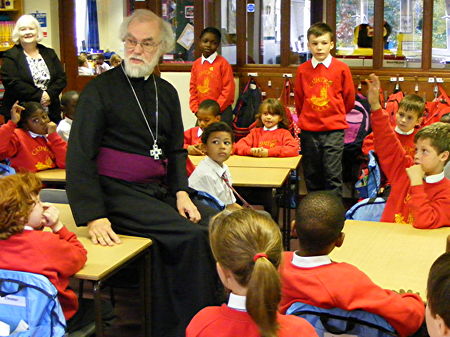 Nurture rooms – which are now found in schools up and down the country – are intended to be a bridge between home and school for troubled young children who may behave badly or disruptively in a normal classroom.

The primate spent 90 minutes over lunchtime on Wednesday meeting pupils, staff and some parents at Southwark Cathedral's primary school in Redcross Way.

Headteacher Sylvia Morris expressed delight that nurture room, funded by Southwark Council, was located in the centre of the school.

The Archbishop spent time with a small group of pupils in the nurture room and said prayers with them before joining guests in the school hall.

On arrival at the school the Archbishop had been shown round the buildings and classrooms by pupils Isaac Rowland and Henrietta Brew-Riverson.

At the Art House he met parent and trustees chair Keith Wilson and director Caroline Rolf before inspecting the new outdoor sculpture by Jess Flood-Paddock.

In the nursery the Archbishop sat crossed-legged on the floor to join in a song. During question time in serveral classes he was asked about where he lived and what animals he had at home.

In reply he said that the gatehouse at Lambeth Palace looked at bit like a prison entrance but disagreed with a suggestion that his home was a castle. He agreed that the garden was almost as big as the Queen's.

He revealed that his pet cat had died and that there was a fox living in the garden along with bees.

With older children he discussed how having recently been with the Pope at Westminster Abbey he would be in Canterbury on Saturday and in India for three weeks next month.

The Archbishop of Canterbury last met Cathedral School pupils when he took part in the school's tercentenary celebrations at Southwark Cathedral in 2004.