A new charitable initiative to help community projects in Lambeth was launched this week at a Lambeth Palace reception hosted by the Archbishop of Canterbury. 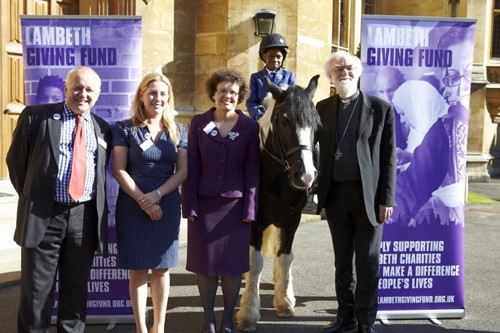 Donations to the Lambeth Giving Fund will go towards six local charities working to provide opportunities for young people at risk, a chance to thrive for people with mental health and a better quality of life for elderly people.

They include the Ebony Horse Club in Brixton that helps disadvantaged young people through riding, Stockwell Good Neighbours, a club which provides a vital meeting place for older people, and Mosaic Clubhouse that gives people with severe mental ill health vital work skills.

"The three focal points of the charities that are involved here are absolutely crucial in our life in this city and in this neighbourhood at the moment," said the Most Revd Dr Rowan Williams, Archbishop of Canterbury.

"They are about dealing with young people's aspirations, they're about challenging the stigmatising and isolating of people with mental health challenges, and they're about keeping older citizens fully integrated into the community and securing a real quality of life for them.

"All of these things are so vital for a good working society at large and a good working neighbourhood. That's why I'm so enthused that these are the three focal points.

"I'm very pleased indeed that Lambeth Palace has been able to open its doors this morning, to welcome you here and to assure you of our prayer and whole hearted support, for what you're doing in the wider community."

The Mayor of Lambeth Cllr Clive Bennett and the council's chief executive Derrick Anderson were also present at the launch, as were the three councillors who have ensured cross-party backing for the initiative: Labour's Sally Prentice, Lib Dem Peter Truesdale and Julia Memery for Lambeth Conservatives.

"The Archbishop of Canterbury's support for the launch of the Lambeth Giving Fund is very special and hugely appreciated by everyone involved," said Cllr Prentice.

"I hope that many Lambeth residents will feel inspired to make a contribution to their community by donating to the Lambeth Giving Fund on a regular basis."