The Archbishop of Canterbury has helped to make a "Dove of Peace" mosaic which will be installed in Archbishop's Park early next year. 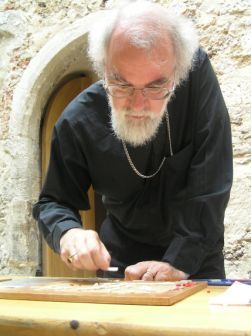 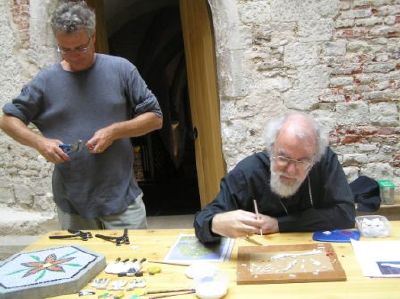 The Archbishop with David Toothill of Southbank Mosaics

The "Dove of Peace" is part of a larger mosaic which has been made by Southbank Mosaics in collaboration with many local volunteers depicting a "Tree of Life" (an oak tree) with several symbols of Lambeth within it.

Although the Archbishop has never made mosaic before he was able to lay the tiles on to craft paper in the crypt of Lambeth Palace ready to be secured into cement.

"This project has brought people together from across the community, adults, families and children and the result will be a colourful and beautiful mosaic to be enjoyed by visitors to the park for many years to come," said the Archbishop, the Most Revd Rowan Williams.

The mosaic depicts lambs at the foot of the oak tree, a reference to the suggested origin of the name Lambeth as the berth where lambs were brought to be bought and sold to supply Londoners

There are also pineapples in the oak tree because Lambeth resident John Tradescant grew the first pineapple in England.

Local youth groups from the Coin Street Family and Children's Centre and the ADI Centre have also helped make the mosaic and to cast a dozen paving stones which will all be installed into the children's play area in Archbishop's Park.

Archbishop's Park is next to Lambeth Palace, the London residence of the Archbishop of Canterbury.

The artists and volunteers have used the "indirect method" to make the mosaics, so that the design can be made in a studio, club house or in the crypt of Lambeth Palace, and then turned over into cement when they are installed.

Southbank Mosaics is a social enterprise based in the crypt of St John's Waterloo.

The finished work is due to be unveiled in the new year.