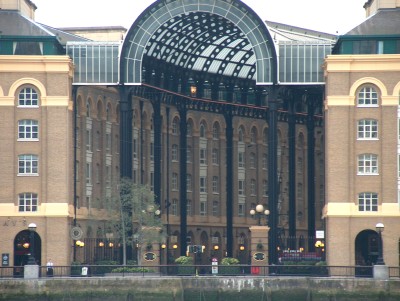 This was one of the first major developments in the SE1 area's recent regeneration. In 1651 Alexander Hay took over the lease on a brewhouse in Hay's Lane, and the business empire his family developed gave its name to Hay's Wharf, once famed for its tea clippers. Hay's Wharf pioneered cold storage, receiving new Zealand butter from 1867. In the late 1980s the main dock was filled in and covered with a glass roof, forming the main arcade of Hay's Galleria. A 60ft stunning sculpture by David Kemp called The Navigators now forms the centrepiece. In the main arcade chainstores such as Boots site side-by side with smaller businesses and craft stalls.

Eating and drinking opportunities include Cafe Rouge, Balls Brothers and Auberge. For book lovers the Riverside Bookshop is a must, while the Christmas Shop enables you to get festive all year round. The Cottons Club in the Lower Walkway boasts luxury swimming, squash and gym facilities.

In the Summer and at Christmas the Galleria hosts lunchtime concerts. There are also plans to revive the popular annual Oyster and Seafood Fair.